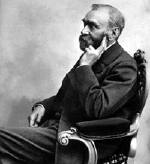 Alfred B. Nobel (21 October 1833 – 10 December 1896) was a Swedish chemist who made a large fortune by the invention and manufacture of explosives. He left the bulk of it for a foundation that would dispense prizes to the most distinguished workers in science, letters, and the peace movement.

– Alexis Carrel is one example. However, about one hundred fifty of the recipients did not write about or speak on religion.

This squares, wrote McCabe, with the findings of James Leuba that seventy per cent of American scientists (including teachers in institutions under sectarian influence) are atheists or agnostics. He found that of the five definite Christians, two (Kipling and Mistral) are of doubtful orthodoxy, one (Eucken) is a theologian of no literary merit, one (Pearl Buck) had a serious quarrel with her Church, and one (Selma Lagerlof) is a sentimental writer of little more than local repute. Meanwhile, the following international rationalist writers received the prize:

The following did not:

Few rationalists, McCabe notes, “seem to be aware of the strength of their position, while the strength of the Churches is now in the less educated Fundamentalist masses.” He qualified this by saying that “we must, however, take certain circumstances into account. The judges and their academic advisers are for the most part conventional Christians, and are apt to understand the qualification ‘of an idealist tendency’ in their own way, while, as men of one of the smaller States, they – as the awards show – are apt to strain matters in favour of small nations or to be swayed by broad political considerations. Thus, while the literary prize has been awarded repeatedly to men and women who are almost unknown outside their own small countries – G. Deledda, Gjellerup, Selma Lagerlof, Pontoppidan, Sigrid Undset, etc. – or to Christian writers of no literary distinction like Eucken, world-figures, mostly of a decided idealist (but Rationalist) tendency, like Wells, Conrad, Zola, D’Annunzio, Capek, Galdòs, Ibañez, Santayana, Gorki, Tolstoy, Sudermann, Sinclair, and Russell, etc., have been passed over. (Bertrand Russell in 1950 received the Prize in Literature). Further, the award for humanitarian work has occasionally been rather parochial (Archbishop Soderblom) or very questionable (Elihu Root, Theodore Roosevelt, Austen Chamberlain, A. Henderson, Gen. Dawes, or paid officials at Geneva). Of the recipients of the scientific awards, in fine, not one in five has ever declared his views on religion.”

Nonbelievers Who Received the Nobel Prize

*Emily Green Balch and also was a Unitarian and Friend – Balch who won the 1946 prize for founding, along with Jane Addams, the Women’s International League for Peace and Freedom.

*Jean-Paul Sartre – who, however, refused out of principle. When his surviving relatives demanded the money that went with the prize, they were rebuffed.

For his 1991 Ph. D. dissertation in zoology, Greg Graffin sent a questionnaire to members of the evolutionary biology community, namely, those who were members of the National Academy of Science in the USA and evolutionist-members of national academies in other countries as well. The questionnaire is composed of three sections: 1) Statement of Belief, 2) What Evolution Teaches/What it Ignores, and 3) Reconciling Belief with Scientific Practice.

A video interview discussed his findings. The results of his study were made available in book form and also online:

I. Introductory remarks on the interpretation of the results
II. Discussion of Results

II.D Can a deist be a monist?
II.E Dualism
II.F The naturalists dilemma: monism or dualism?
II.G Questions with indistinct or anomalous central tendencies.
II.G.1 Progress and purpose.
II.G.2 Morality.
II.G.3 Free will.

I. Evolution and religion, refining the questions for future work.
II. Postscript.

APPENDIX I, The questionnaire available online

Some of Graffin’s findings include the following:

• Asked their religion, 8.72% responded Christian, 1.5% responded Hindu, and 87.25% gave no answer.
• Asked their belief systems, over 41.61% responded atheist, 22.15% naturalist, and 16.78% responded agnostic.
• Asked if they believed in God or an entity that exists beyond the scope of our observations that is responsible for designing and maintaining life on earth? – A. I believe in God as described in this question; B. I believe in God, but my God merely started the process of the universe, and of life on earth, and does not intervene on a day-to-day basis; C. I don’t believe in God in any traditional sense of the word; D. I don’t believe in God, but I do believe that there are entities in the universe that are beyond the scope of science and are forever going to remain so – 79.19% responded “C,” that they were non-believers, atheists.
• 87.9% did not believe in immortality.
• 66.44% believed that the findings of evolutionary biology can influence and alter morality.
• As to the relationship between evolution and religion, 71.88% responded that religion is adaptation, a part of evolution 10.07% responded that they are mutually exclusive magisteria whose tenets indicate mutually exclusive conclusions, and 6.71% responded that they are totally harmonious, that evolution therefore is one of many ways to elucidate the evidences of God’s designs.
• As to whether they kept their beliefs about morality and ethics separate from their practice and teaching of evolution, 54.36% responded yes and 38.93% responded no.
• Asked if they considered themselves a naturalist in the metaphysical sense, 79.19% responded yes and 14.09% responded no.
• Asked what kind of a belief system they would advocate, if pressed, as being the most consonant with a lifelong practice of evolution, 68.46 favored a naturalistic one that is based on materialism and incorporates advances in scientific knowledge; 15.44% favored one that incorporates some aspects of traditional religion and some aspects of modern science; and only 5.37% responded one of the traditional religions (i.e., Christianity, Islam, Judaism, Buddhism, etc.).